Wikipedia defines it as “a person who starts quarrels or upsets people on the Internet to distract and sow discord by posting inflammatory and digressive, extraneous, or off-topic messages in an online community (such as a newsgroup, forum, chat room, or blog) with the intent of provoking readers into displaying emotional responses and normalizing tangential discussion, whether for the troll’s amusement or a specific gain.”

Broken down to its simplest form: online trolls are keyboard bullies who sit high on their throne of judgment.

There is no bigger bully than the troll on the internet. The worst part of it of is…they are grown-ups. Adults. People with children and grandchildren.

I was scrolling through Facebook while waiting for my son’s soccer practice to be over when I saw an article posted by GMA. And there was the comment: 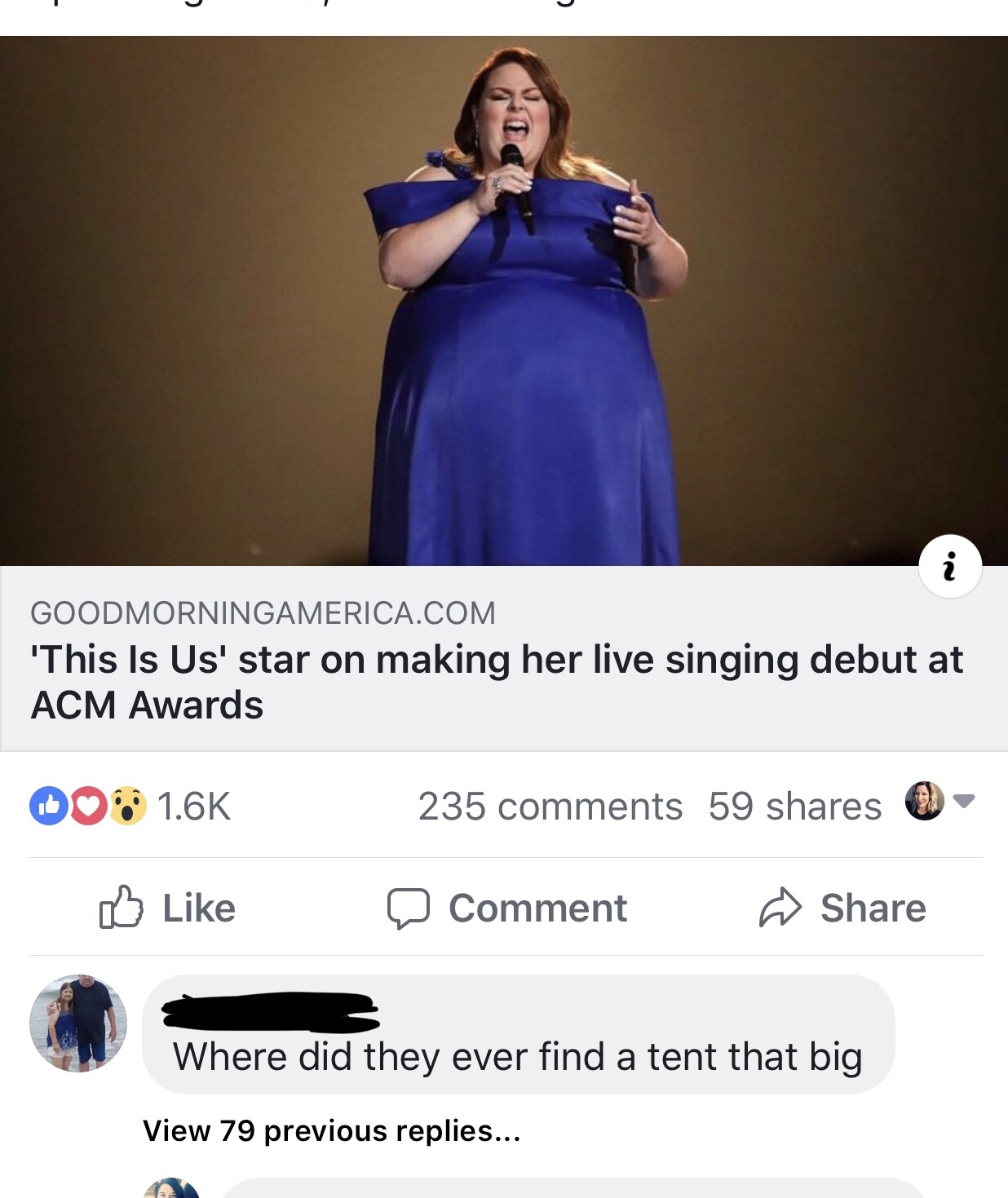 A woman actually wrote that. I blacked out her name because I don’t believe in any kind of online shaming…even if she deserves it for writing something so callous.

The woman in the picture is Chrissy Metz…one of the stars on “This is Us.” Her voice is AHH-MAZING. I remember watching her sing the other night on the ACM Awards and I was mesmerized. I don’t remember what she was wearing…I just remember her voice…her unbelievable talent.

Sadly, her talent was overshadowed by people picking apart her appearance…suggesting that she consult with a doctor about her weight…telling her she’s a bad role model for kids.

A group of adults are calling a woman, who they don’t know, every name in the book. And now suddenly they’re the experts on who is a good role model?

This is the thing…an online troll is not allowed to define what beautiful is.

An online troll is not allowed to determine what size a woman or man should be.

An online troll is not allowed to determine someone’s worth.

Online trolls are cowards who have venom in their hearts…they think their keystrokes make them powerful when in reality, it only reveals how weak and pitiful they really are.

It doesn’t matter the size of your waist…the color of your hair…the shade of your lipstick…the jiggle of your thighs. Who give a s*** about the superficial nonsense? The only thing that can make someone UGLY is their lack of character or integrity…if they hold people’s head under water…or if they treat others like they’re LESS THAN.

The online trolls will still be there. (Cue the eyeroll)

The trolls are haters…and haters are just confused admirers.

You’re probably taking the risks they didn’t have the guts to take.